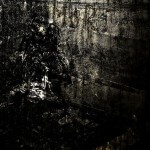 Here’s an old review I found. I wrote it many years ago for a webzine I used to write for and also posted it on Encyclopaedia Metallum in July, 2008. I haven’t bothered to change or edit it (apart from fixing a grammatical error where I ’d written ‘ abbreviation’ instead of ‘acronym’), even though a lot of water has passed under the bridge in the meantime and I don’t particularly like this rip-off label at all…

The primary attraction of Blut Aus Nord’s music resides in their uncanny ability to continuously challenge the listener. The French philosophers never cease to amaze with their capacity to evolve and reinvent themselves. Imagine, therefore, my surprise to discover that Vindsval and his not-so-merry crew sound as familiar as an old friend on their fifth full-length, ‘MoRT’ (French for dead and also an acronym of Metamorphosis of Realistic Theories).

A harrowing and unrelenting black metal entity on their first three (landmark) albums, Blut Aus Nord carved a new sound on monumental 2003 opus ‘The Work Which Transforms God’ – surely one of the most innovative contributions ever to the BM canon. They travelled further along that same Godfleshian experimental avenue on the subsequent EP ‘Thematic Emanation Of Archetypal Multiplicity’, and the album we’re dealing with here continues to explore a growing fascination with horrific urban terror and horrible industrialisation. These eight chapters are nightmare soundscapes that tremble beneath the concrete jungle erected by modern man.

BAN have not made things easy for themselves; they have stubbornly crafted an album that answers their stone-cold muse. This is the stuff of real nightmare. Nothing to do with demons or trolls or Satan, Blut Aus Nord’s evil dwells closer to home: in the mind. Their output is the soundtrack to inner city strife, towering scaffolds, edifices weighed down by the filth of mankind, overdoses, traffic jams, hopelessness and crushed dreams. You can almost feel the decay setting in as the unsettling rhythms, subterranean chants, primeval gurgles and terrifying emissions take grip of your sanity.

‘MoRT‘ is a very uncomfortable ride and, while the creators do appear to be treading familiar ground at times, Blut Aus Nord’s art remains more compelling than 99% of what’s out there. While I was slightly disappointed that there are no curveballs contained herein (‘MoRT’ could be legitimately dubbed ‘TWWTG II‘), the potency of this trauma-inducing mindfuckery is extraordinary.

Black Metal in the David Lynch vein, ‘MoRT’ would be hailed an absolute classic if Blut Aus Nord hadn’t already outdone themselves on its predecessor. As psyche-shifting, ego-altering and edifying as music gets.