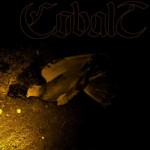 All I knew about Cobalt before clapping ears on ‘Eater Of Birds’ way back in 2007 was that the Colorado duo’s debut album was entitled ‘War Metal’. So I braced myself for a Marduk-type barrage of blistering blackness. This duly arrived on opener ‘When Serpents Return’, but I quickly discovered that there’s much more to the experimental and deeply inspired Cobalt beast than meets the eye…

For a start, the chaos is a lot more adventurous than I would have imagined. If war Black Metal is akin to being bludgeoned to death by panzers on a battlefield, ‘Eater Of Birds’ is kinda like being gradually fucked up in some laboratory experiment. By a surgeon/doctor so skilled he could rid the world of cancer and AIDS but prefers to mess with minds and mush people up.

There’s still a more-than-adequate amount of overt aggression on here. Imagine Enslaved if they had gradually become more frenzied rather than wandering down the dubious prog path. Some of the music reminds me of a cross between proper (i.e. early) Enslaved and Darkthrone or Carpathian Forest rather than the artier names being bandied about in some circles (Swans, Neurosis etc.), but it is when Cobalt decide to do their own, beautiful thing that they really make you sit up and take notice.

I won’t spoil the fun by pointing out which exact sections you should watch out for (try all of it!) but, believe me, there are many unexpected movements and detours along this 70-minute bipolar ride that will cause the hairs to stand on the nape of your nodding-in-approval neck. It’s unpredictable yet spontaneous; innovative yet familiar. Throw in a guest appearance from none other than Jarboe and the sumptuous digipack artwork and you just know you’re onto a winner all the way.

Astonishingly, Cobalt followed this album up two years later with the equally-excellent ‘Gin’. You don’t need to be a major in mathematics to deduce that we’re due a fourth full-length from these loons in 2011.