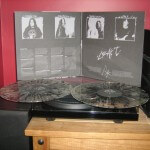 The European vinyl edition of the latest Craft album was handled by Trust No One Records and disappeared again as quickly as it surfaced. Thus, even though I dwell unhappily in the going-down-the-shithole-fast Eurozone, I had to seek out the US equivalent, which is a fantastic effort from Southern Lord – even if it did cost me an arm and a fucking leg. For $18 plus almost $20 for postage and packaging, I received a fabulous 180g 2LP in deluxe gatefold sleeve. Opted for the clear-with-grey-splatter version and it arrived in less than a week. Looks the part for sure, but how does the fourth Craft full-length (and first in six years) sound?

Well, to start, the follow-up to ‘Fuck The Universe’ contains one of the most pointless intros in Black Metal history (not sure how ‘John’s Nightmare’ even merits a title) but the remainder of Side A is superb, especially the stomping and varied ‘Come Resonance Of Doom’. From the get-go, it’s clear that years of silence have not blunted the Swedes’ swords; mastercraftsmen they remain; composing and executing ancient-sounding, primordial Black Metal of the highest calibre.

Though it is more accessible and melodic than a lot of the albums reviewed on here, ‘Void’ still packs a considerable punch and I can’t imagine it disappointing any fans of traditional, orthodox Black Metal. Without coming close to being spectacular or ground-breaking in any way, this double record manages to deliver the goods impressively.

So, we get three songs on Side A and three more on Side B before proceedings close in monumental fashion with ‘Bring On The Clouds’ and the epic eight-and-a-half-minute title track on Side C. Call me weird, but I always feel let down when there is nothing on Side D. For tidiness sake if nothing else (not to mention the possibility of improved sound), the music on a 2LP should be spread evenly over four sides. Either divide them up differently or throw on some bonus material.

All in all, though, ‘Void’ is a solid effort from seasoned campaigners, worthy of the financial outlay – but don’t feed the greed of Ebay speculators to acquire it.