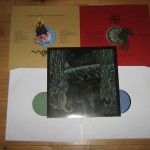 It’s hard to know where to start when reviewing a release of this magnitude. While S. Devamitra’s work as Dead Reptile Shrine has always been intriguing to say the least, I wasn’t really braced for such an ambitious offering as ‘The Sun Of Circles And Wood’, which comprises a total of 20 tracks and some 132 minutes of music spread out across two full-length albums; namely ‘Circle Of Trees’ and ‘Circle Of Stars’.

The 2LP is released by a label that has no connection whatsoever with Black Metal but Weird Forest clearly knows how to produce, package and present vinyl as this whole thing looks and feels fantastic. Glorious gatefold sleeve, superb artwork, high-quality records … they’ve ticked all the boxes.

I simply had to buy this, even though it’s general unavailability meant purchasing directly from the label and paying through the nose for postage from the States. Musically, ‘TSOCAW’ is a definite improvement on its predecessor, 2008’s ‘Burning Black Infinity’. It’s not BM for the purists; more like ethereal, surreal, ambient blackness that’s sort of tripped-out and psychedelic. The music is weird and indifferent, cosmic at times; the vocals are just pure strange.

There’s so much music on the two records that I would be here all week should I try to analyse the album(s) fully. A sprawling work of art, ‘The Sun Of Circles And Wood’ needs to be digested to be fully appreciated. I have neither the time nor the patience to try to describe it in detail. I can’t even listen to it all in one sitting (notwithstanding the fact that I’d have to get up three times anyway to change the record or turn it over)! There are elements of post-BM and post-rock and experimental-blah-blah-blah that would normally put me off but DRS manages to keep everything within a very clear Black Metal shell.

At times raw and shadowy and visceral, other times reflective and melodic, this is one of the most demanding, varied and unusual albums I’ve bought in years. In a way, it’s hard to get into it properly because it’s such a vast album (and there are so many other bands out there to try out) but this is without doubt something of an underground classic worthy of your keenest interest.

Strange, strange guy; fucked-up album; what more could we ask for?