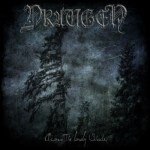 Ten years in the making, Draugen’s debut full-length is a decent attempt at Golden Era Norwegian worship. On ‘Among The Lonely Shades’ (don’t let the uninspired title put you off), we are presented with eight tracks in total, two of which are short instrumentals. In the vein of bands like classic Darkthrone (only not as raw), Burzum (obviously) and early Enslaved / Satyricon / Immortal, Draugen dishes out some competent ancient-sounding Black Metal with more than a hint of melody, which adds to the overall atmosphere without drowning the whole thing in sugar / shit.

Throughout the album, there are some nice sound effects to add to the ambience; you feel like a pariah might, hidden in a cave, being hunted by Christians in the woodlands outside, whilst a thunderstorm rages. Or something… The compositions are top-notch; the execution exemplary; and the production pretty much perfect for this kind of epic-sounding BM.

Don’t think for a minute this is one of these wishy-washy, ultra-melodic albums with overwhelming keys and clean vocals, however (if it was, I would refuse to review it), because there’s no such thing to be found within the notes of ‘Among The Lonely Shades’. It is very melodic, I’ll grant you that, and I normally have a big issue with that … but I find this album to be quite endearing and I’d gladly recommend ‘ATLS’ to anyone who fancies the idea of 50 minutes of melodic BM from France that retains most of its edge.