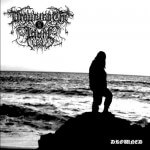 Upon first listen, I was disappointed by the bad sound that dogs this album. So much so that I was initially tempted to write a negative-ish review. That would have been an injustice. Drowning The Light has benefited from a much cleaner production on more-recent releases and I suppose I had become accustomed to the more-polished, easier-digested incarnation of the Aussie act. But this is just as good in its own way, if not better.

You have to bear in mind that ‘Drowned’ is an excavation of DTL’s self-released, debut album from eight years ago. As such, it marks a landmark moment in time. Certain allowances have to be made. If it was reworked or remastered, that simply wouldn’t cut it. You have to take the rough with the smooth. So what we have here is an even rawer, more lo-fi collection of tunes than usual, almost of demo quality.

The sound is kind of muddied and the mix is pretty much all over the place. But, at the end of the day, it’s underground Black Metal we’re talking about and I’m sure Azgorh put this together on a shoestring. Beneath the murky haze, there’s some very imaginative, inventive and inspirational BM to be found, depressive in a way – but not in a bad way. If you’re already a fan of the ‘band’ or if you appreciate kinda-shitty-sounding Black Metal, you will hardly regret acquiring ‘Drowned’.

If you’re not on familiar terms with DTL yet (as you should be), perhaps it would be more prudent to check out ‘To The End Of Time’ or ‘An Alignment Of Dead Stars’ first.