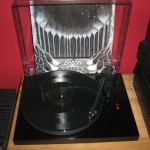 Gilead Media is on a red-hot streak at the moment so no surprise to discover they have unearthed another black-encrusted gem here with the debut release from Minneapolis black-metallers False – a vinyl EP comprising two twelve-minute-plus cuts. ‘The Key Of Passive Suffering’ and ‘Sleepmaker’ announce the arrival of a corrosive new force on the underground circuit and I would be bold enough to suggest that False (whose members are unknown) could become a lot of people’s cult favourites.

One of the first things to stand out on ‘The Key Of Passive Suffering’ is the scathing, visceral vocals which – accompanied by blistering guitars and coffin-lid drums – threaten to tear the skin off the listener’s agonised face. It’s really powerful stuff, not suitable for those who dig easy-listening BM. Not that there’s no atmosphere on this; to the contrary, it’s very atmospheric … it’s just that said ambience is so dark and impenetrable it almost passes you by. Except you feel like you’ve just gone three rounds with Floyd Mayweather, so clearly something has occurred…

The pummelling punishment and breakneck speed is broken up by some nice keys, which mercifully remain well caged in the background, but there’s no doubt that this music is all about intensity and bare-knuckle emotion – an ultra-violent adrenaline rush.

‘Sleepmaker’ is dirtier, crustier and sludgier, infused with genuine organic filth, swirling through the speakers like a fucking mudstorm, wrecking and ransacking, an ode of utter annihilation. But it’s not insanity for insanity’s sake; there is a melodic undercurrent and again the sparse use of keys takes away the dull edge (which might otherwise be overbearing). A majestic interlude also serves as an ideal counterpoint to the aggression, making for a perfectly-balanced piece.

While I’m certainly no advocate of EPs (which I generally think are a cop-out and / or rip-off), I am willing to make an exception for this one because a) it’s rather magnificent and b) it’s effectively retailing for the price of a single anyway, which makes a mockery of my personal objections.

Might be only 25 minutes long but ‘Untitled’ is nevertheless worthy of investigation.