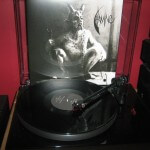 This one arrives from way beyond, from totally off the radar, leaving me transfixed. Quite simply, ‘Famine’ has to be one of the best Black Metal records unleashed in 2011, scoring maximum marks in every conceivable compartment. First of all, the lay-out and artwork are fantastic: an immense 200 gram vinyl wrapped in a stunning gatefold cover, complete with lyrics on the inner sleeve. Looks the part…

And sounds the part, too! Famine – the vehicle of an entity emerging out of New Jersey operating under the uber-modest moniker of Worthless – specialises in a spectacular strain of raw, grim, cold and callous Black Metal. The vocals are corrosive, desperate shrieks not for the weak of heart; the music fast and fierce, ripping through you, carrying enough venom to rip your face off from one hundred yards.

I’m at a loss to name any obvious reference points but somehow Famine reminds me of Funeral Mist, only more raw, less polished. That’s not to say this album is under-produced, because it certainly isn’t. The production is perfect and on a track like ‘Enter The Temple’ (the third of eight in total), which is slightly more bass-heavy and accessible than its two predecessors, the instruments breathe through organically, majestically. Masterful stuff.

The real clincher on ‘Famine’ is the three ambient / instrumental interludes (for want of a better word) which comprise Tracks # 4, 7 and 8 – ‘Amaru’, ‘Liber Porta Lvcis’ and ‘Curse’. The inclusion of these lends an occult, otherworldly, ethereal, esoteric bent to proceedings, rendering an already stupendous album utterly mandatory. In summing up, this is a rare and unique Black Metal record that deserves its place in any discerning collection.