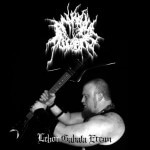 ‘Lebor Gabala Erenn’ proves that you don’t have to be a virtuoso musician to produce compelling music. In Black Metal, it’s all about capturing the right vibe. As long as you compose and execute an album that sounds dark and foreboding, then technical wizardry isn’t even an afterthought. Thomas – the lone soul performing on Ankou Awaits’ debut full-length – is probably an average musician at best (if I can say such a thing about a multi-instrumentalist!) but he knows how to use his talents to maximum effect and the result is a breath-taking piece of genuinely underground BM.

At times it sounds haphazard; there are moments along the way where I was waiting for the whole thing to simply fall apart at the seams; but ‘Lebor Gabala Erenn’ stays the distance and emerges triumphant, a fist in the face, a sword to the throat, a defiant accomplishment that has almost literally come from nowhere. No shiny production in sight, we instead get an organic-sounding album that resembles an underwater or cave-imprisoned Inquisition, swirling dissonance and devil-may-care nastiness seeping from the speakers.

I really like the sound. It’s evil and base and basic and perfect on so many levels. Black Metal was always supposed to belong to the minority and this is music that fits in with that kind of ethos. The poetic lyrics (courtesy of Jessica) enhance the product and the end result is ten tracks of underground, grim, thoughtful, raw, uncomplicated one-man Black Metal with nary a dribble of corpsepaint in sight.