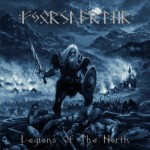 Pagan Black Metal and melodic Black Metal are dubious areas I tend to avoid like the plague, for obvious reasons. Anything to do with Vikings and longships and runestones and battles of the north will generally cause me to run a mile – and I’m a lazy sod. However, Danish one-man outfit Fjorsvartnir caught my attention because the debut album ‘Legions Of The North’ is actually quite good (considering). Shock. Horror. Yeah, I know.

Well, it’s not brilliant, to be frank, but within the limitations of what this rather pompous and overly-triumphant, fist-clenching, flamboyant subgenre allows, this release is more than acceptable. Of course, it’s overly melodic (which is par for the course) but there are some aggressive parts and occasional harsh vocals. It’s well-produced, heavier than I’d have expected, and dare I say catchy as Hell?

I’m not going to go over the top with my praise or bring any undue work upon myself by writing a detailed review (not that I ever do) seeing as this kind of BM is pretty much outside my own personal comfort zone. But it’s pretty good stuff and should do the trick for anyone who craves solid Pagan Black Metal or melodic Black Metal with a proud, epic feel and some hummable parts that will stick in your mind. Maybe.