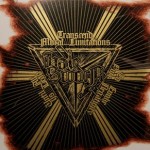 One thing’s for sure: I will never be able to remember the name of this album. Abbreviated above for the sake of tidiness on my homepage, the debut from one-man Swiss entity Hatesworn is in actual fact called “Transcend Moral Limitations To Evoke Pure Negativity Until All Is Dead”. Quite a mouthful and I’m not even going to try to get my head around it.

This album essentially collates three demos, which have been re-mastered with the addition of two more songs, resulting in a total of 72 minutes of gloomy, despondent, depressive Black Metal that possesses moments of genuine dementia and loathing as well as some soothing, harmonious parts. But, so dark is the fabric from which this material is woven, so heavy and suffocating the feel of the album, that it’s anything but easy going.

This kind of music is patently not meant to cheer you up or give you hope. To the contrary, it is overwhelming, spirit-crushing and at times close to soul-destroying. Quite melodic in parts, yet at its core raw and undeniably of the underground, “Transcend Moral Limitations To Evoke Pure Negativity Until All Is Dead” is a harrowing journey downwards that I wouldn’t recommend to the unstable or unhinged.

If you fancy some deranged, disturbing, bleak and joyless Black(ish) Metal then this should tick all the boxes as well as a few others. Unnerving and fascinating in equal measures but ultimately irreparably marred by the ill-advised inclusion of nauseating female vocals, which – let’s be frank – ruin an otherwise engaging album.