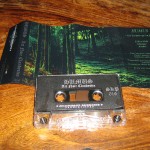 Sale Freux mainman Dunkel (vocals, bass, guitar) joins forces with drummer Èclat Cadavéreux to form Humus, a band similar to the aforementioned Sale Freux but with a slightly more mystical, rustic, forest-y bent, if you get my drift. This debut full-length comprises three long tracks, stretched out over some 32 minutes in total, and was unleashed by SKP on cassette format four months ago.

I listened to ‘Art Noir Clandestin’ a few times upon purchase but never had time to scribble a review. I only remembered it today when I received an email from the label informing me of their four new releases (including a mandatory new SF album, which will be something else indeed if even half as good as the unsurprisingly sold-out ‘Subterraneus’). Anyway, I lobbed the Humus debut into my cassette player again this evening and was blown away all over again…

I like the primitive sound and I love the crisp, natural underground vibe seeping out through my speakers. Even though the music is suitably raw and rough, there’s still an atmospheric element at play which renders the whole thing both palatable and disturbing. There’s not much to say about this wholly creditable, wonderfully organic UGBM release apart from the fact that it’s fascinating, genuine and available from the label for a mere pittance.

I think you should check this out and grab a copy of the new Sale Freux full-length while at it cos this Dunkel guy is producing some seriously impressive shit these days.