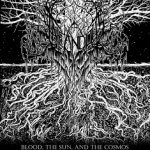 This mysterious horde / entity delivers four tacks of deranged and often transcendental Black Metal (which can suddenly become tamed and restrained in the blink of an eye, only to enter the realms of controlled chaos once more) on debut full-length ‘Blood, The Sun, And The Cosmos’. The album comes in a really attractive slim, six-panel digisleeve, with interesting artwork, design and layout. Something different in a world where CDs are so boring it is a crime!

Lyrics to the four fairly-epic songs – which clock in at a generous average running time of around eleven minutes each – are also included, which is always welcome.

If the sound is intense and at times crushing, this is more to do with the overwhelmingly oppressive tone and mind-set at play rather than any particular deployment of speed or overt aggression. Having said that, we do get some moments of naked fury. The music here is mostly mid-paced but it’s dense and unrelenting in terms of atmosphere, creating a nightmarish soundscape with just enough melody and variety to bring proceedings as a whole to the acceptable side of bearable.

All in all, ‘Blood, The Sun, And The Cosmos’ represents an intriguing and enjoyable schizophrenic declaration from a true underground force whose genesis is the aural equivalent of a poisonous plague, promising pestilence and peril to friends and enemies alike. And that’s the way to have it.