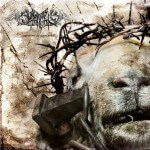 Inferius Torment. Wonder what that means. How can one be tormented inferiusly, with or withoutout an o? I digress; forgive me. ‘Ceremony Of Godslaying’ is the second full-length from this strangely-monikered Russian troop, who emit some impressive form of searing, scorching Black Metal mayhem intent on crushing the skull and testicles of yon Christ fella. Jesus and his minions come in for a lot of abuse in the metal world and they aren’t spared any ill wishes here as track titles like ‘Diablocal Perversity’ (sic) and ‘Funeral Of Christian God’ suggest.

Amid the maelstrom of hatred and violence, there is to be found some ethnic instrumentation but sneeze and you’ll miss it. In short, this is an aggressive, focussed attack, virtually unrelenting, taking no prisoners – a beefy fist in the liver of God, a rallying cry to like-minded, dark forces. The pace might slow down at times but the claustrophobic, crushing sense of doom continues to pervade throughout.

A nice choral passage comprises the aforementioned ‘Funeral…’ but this soon makes way for a further barrage of invective on the closing track, ‘Unbaptized Flames’, driven by the demented drumming of (ex-?)Belphegor member Torturer. The prominent battery is very much the pulse, but the guitar also cuts like barb wire. Vocals are caustic and bitter in the best tradition of Black Metal. As with a lot of BM, I’m not honestly sure if there’s any bass involved or not. I’m guessing it’s lurking in there somewhere, drowned in the chaos.

‘Ceremony Of Godslaying’ is a strong album. Mostly punishing and primitive, it is elevated above the norm by what I would consider mandatory hints of melody and deviation. By the second minute of the opener, ‘Agnus Dei’, I knew Inferius Torment weren’t afraid to mix things up slightly and this propensity to vary their onslaught pays dividends for the next 35 minutes. (Short album.)