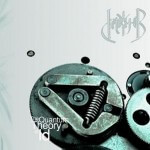 In the case of Inquisitor, their form of non-BM sounds to me like technical Death Metal, with crazy piano parts and cerebral lyrics and a thrashing classic Death Metal sound. Definitely more like Gorgots or Cryptopsy than Mayhem or Burzum. I’m not sure why this isn’t marketed as Death. Maybe Black Metal is an attitude, not a sound. Perhaps the moon is really a chunk of cheese hanging from the rooftop of my leafy suburban home. Who knows?

As Death Metal goes, this is pretty okay-ish, I suppose. Not great but good. I had predispositioned myself to despise this once I saw that word but I’ve heard worse, in fairness. It’s competently played and well written and quite ambitious in scope. A lot of people will like this, I’m sure. Especially fans of bands like Behemoth and Vader. In a nutshell, it’s an adequate slab of Lithuanian black death without the black.