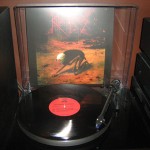 Because it has been released on vinyl and costs actual, real money, Khthoniik Cerviiks’ (glorified) demo, ‘Heptaedrone’, must be judged on the same (stringent…) basis and criteria as a full-length proper. I don’t care if it’s an album, an MLP, a demo, a dead crab or a rehearsal; the only thing that counts is: is it any fucking use?

In the case of these uncouth and noisy, post-apocalyptic Germans, I’m glad to report that their music – even in so-called demo mode – stands favourably alongside the bounty of chaotic Black / Death being unleashed these days. This is caustic, noisy and uncompromising stuff, delivered with the subtlety of a sledge hammer to the pubis. Awesome.

At times, it sounds like Khthoniik Cerviiks are more concerned with making a god-awful racket – with neither structure, sense  nor logic – than anything else and the production is so naked that they might as well be thrashing my living room. Live. In the flesh. This is one demented, warped, surreptitious album (think Pestilence on LSD…) that gives not one fuck what you think. Cool artwork; check out those crazy lyrics.