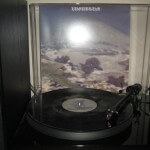 Strictly speaking, this isn’t really a new album. The ninth full-length from these Belgian oddballs came out late last year and I’ve only just got around to checking it out. I think this is the fourth or fifth Lugubrum album to make its way into my hands and I’m still not sure quite what to make of them, to be honest. All I’ll say with any degree of certainty is that they are strange fish, indeed.

I would be taking liberties to refer to this music as Black Metal at all. It’s so leftfield and unusual that I’m not sure what category ‘Face Lion Face Oignon’ could be squeezed into. The vocals at times are reminiscent of BM and the music does enter that general terrain for fleeting moments, but then all manner of rural, agricultural, farmer-fuck shenanigans enter the equation and all logic seems to leave the building.

Interesting to a degree, perhaps, but the novelty factor wears thin very quickly, rendering repeat listens almost unbearable and leaving me with a deep suspicion that no matter what way you try to dress it up or interpret it, this album is either an unfunny joke or a pile of shite. When a band is so obviously taking the piss, surely the joke is on them. I prefer something that takes itself a bit more seriously. If I want comedy, I’ll watch a Rhod Gilbert DVD or cut the legs off a spider.

Eclectic for sure but, ultimately, only in an irritating way. This goes right over my head. But that’s fine because I don’t want to get it.