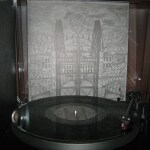 This split brings together three fantastic hordes from the Finnish underground. Apparently, it took the best part of a decade to finally bring it to fruition, which is bizarre seeing as there’s only 37 minutes of music on offer. But ‘Christian Genocide’ is one of those events where I can excuse the unfortunate brevity of proceedings …  a rare triumph for quality over quantity.

I’d certainly like to have heard more of Musta Surma than an intro and one song – the fact that they only contribute seven minutes is a real disappointment (as this band only raises its head sporadically and is an entity I would love to hear a lot more of). Their all-too-brief but superb contribution is taken from their ‘Crushing The Holy Trinity’ session (I think). Also on Side A, we get three uncomplicated tunes from Bloodhammer, the best of which is closer, ‘Night After Night’.

Side B belongs to Annihilatus, a band which hates you and doesn’t want to be your friend. Intolerant of everybody equally, they wage war on jews, christians, hindus, blacks and whites with great enthusiasm. The final excursion on the album is a collaboration between all three bands, who perform the title track in an almost medley fashion. I’m pretty confident from the composition / lyrical make-up of this song that it too was written by Annihilatus.