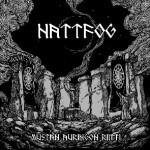 Every now and then an album comes along that is just undeniably brilliant. An album that is so easy to recommend that the task of writing reviews appears almost redundant (and actually becomes quite difficult…). I honestly can’t see how any Black Metal advocate could fail to appreciate Nattfog’s sublime debut full-length, ‘Mustan Auringon Riitti’. Surely this one is going to be universally hailed as a masterpiece of occult Finnish decadence?

Finland is on fire right now when it comes to dark musical output. I’d go so far as to assert that the Finnish scene is leading the way worldwide – except, of course, ‘scenes’ don’t really exist, per se. Nattfog executes excellent early-nineties style Scandinavian / Slavonic BM with a sort of pagan / heathen vibe but this is strictly Black Metal as opposed to Pagan Metal. The songs are both raw and melodic; production is nice and thin, unobtrusive, allowing the spells to come through naturally, like we are listening to a horde of hermits performing some Shamanic ritual live in the woods.

Everything about ‘Mustan Auringon Riitti’ sounds and feels ridiculously natural, which in turn lends an ancient air to the album. The ambience and texture are stunning. You know, at the end of the day, this is essentially just standard Black Metal that’s been done thousands of times before … yet … somehow it captures something extra. A magical, indefinable x factor that elevates the album and the band above most of their contemporaries and renders them exceptional.

The entire album kills but eerie instrumentals ‘Kosmisen Usvan Ympäröimänä’ and ‘Kaksitoista Askelta Luvattuun Valtakuntaan’ are particularly special. It’s like what Burzum might sound like if Burzum didn’t suck.  I have no problem in recommending this even if I’m having difficulty pinpointing what exactly it is that makes Nattfog’s debut so great. Ultimately, it’s probably simple: I love Black Metal and Nattfog effortlessly churns out no-frills Black Metal with tremendous reserves of passion and emotion. Which I love. Obviously.