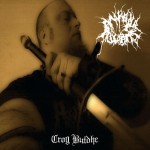 Ankou Awaits’ debut  full-length ‘Lebor Gabala Erenn’ reached me like a foul stench of fetid air and – a mere six months hitherto – this follow-up confirms that the husband-and-wife team from Illinois has no intention of leaving behind the strangely-comforting nether regions of the metal underground any time soon. And why would they when they can create a rumbling racket as compelling as ‘Crog Buidhe’?

Lo-fi and organic, obstinately inaccessible yet oh-so-rewarding for those who get there, this is the antidote to the polished, pristine produce fucking up our beloved subgenres (Black and Death Metal) today. If that’s not reason enough to hail ‘Crog Buidhe’ for the welcome detour it constitutes, then I don’t know what is…

It’s difficult to describe or pigeonhole Ankou Awaits. The sound conjured is unique to my ears and I would be so bold to suggest that there’s more death than black at work. I’m getting echoes of ‘Blessed Are The Sick’-era Morbid Angel, early Incantation and Immolation yet I’m at a loss to think of a single Black Metal horde referenced during these seven ancient odes. Considering that BM is built on adherence to same-sounding structures, I find this almost bizarre.

Beneath a controlled maelstrom of chugging riffs and hammering drums, there are real songs complete with intelligent, meaningful lyrics and a concept that’s obviously deeply meaningful to the deliverers. Through it all, I’m struck by the authenticity, the sincerity and the genuine honesty inherent in ‘Crog Buidhe’. I’m not going to lie – this is hard work at times and not always coherent – but ultimately it’s a major triumph and I’m left with a feeling of utter respect for the artists who have conceived something so pure, raw and uncompromised.