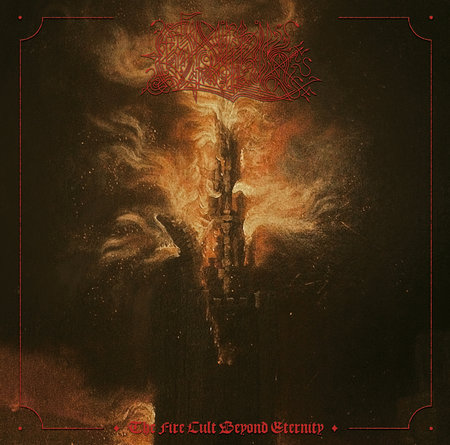 Five years on from ‘Casket Dream Veneration’, Onirik’s fifth full-length, ‘The Fire Cult Beyond Eternity’, is excavated from the vaults and belatedly unleashed, heralding seven obscure odes for the apocalypse in Gonius Rex’s inimitable, unique and strangely dramatic style. The music on this album is distant, ancient, majestic Black Metal – an unusual blend of raw and melodic coming together to deliver something decidedly different.

While the detached and cold vocals render proceedings grim and occult, the twinkling guitars and prominent bass are laden with wicked harmonies, choral singing also making ‘The Fire Cult Beyond Eternity’ deceptively easy on the ear. Some ambient elements are also included, while the flawless drumming of none other than Dirge Rep keeps things moving along ominously and creepily.

This album was recorded in 2014, only months after ‘Casket Dream Veneration’, and is thematically a sequel, the protagonist having returned from beyond the grave to exact retribution, invoking hell on earth as fires burn, rivers boil and lava bubbles from crevices in the surface. Nowhere is the oddity of Onirik more apparent than on the twisted, contorted, puzzling ‘Granted The Vision, Molded Into Stone’, which is so ethereal it threatens to dematerialise and drift away.

‘The Fire Cult Beyond Eternity’ is a sorrowful, wistful and haunting collection of lamentations with an organic and ancient feel. It sounds like it was recorded in a derelict castle or church with flames licking the walls and smoke rising to consume everything. Though clearly indebted to traditional Black Metal, it plots its own stubborn, unworn path and as a result is not an easy album to grasp; instead it remains weird, quirky and deliberately intangible and imperceptible.