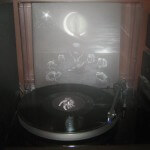 It would be fair to say that Ordinance is not your everyday Black Metal duo (whatever that might be). When the ten-minute ‘Yielding Servitude’ deviates into all-out ‘Hotel California’-worship towards the end of Side A, it would be easy to lose all patience and smash both the record and the stereo into tiny pieces and find a new hobby.

Normally, I would be puking on the floor and screaming sacrilege and blue murder and, well, tears. However, I persevered with the album, got into it, and found that, despite the disturbing echoes of The Eagles on that particular song and again on penultimate track ‘Waning Light’, complete with Slash-like wank(er)y solo, Ordinance are in fact (or should I say in spite of this?) an entity worth checking out.

For the most part, the music on ‘Relinquishment’ is fairly melodic and restrained and catchy (the stomping ‘Sword Of Division’ definitely ain’t and the tempo discernibly gathers towards the end of proceedings before tipping a hat to Led Zeppelin as a fitting finale), but it’s genuinely sinister and eerie in a way that I haven’t much encountered before.

Furthermore, the lyrics included on the accompanying booklet make for an absorbing read. I am merely a weed waiting to be plucked, you know…

Brilliant unorthodox Black Metal in a gatefold jacket. Sixty-five minutes; nothing on Side D.