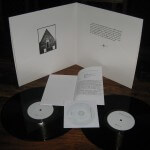 I don’t think it’s possible to go any deeper into the underground than this. ‘Urkaos’ is the definitive work of Swedish duo Karl Hieronymus Emil Lundin and Karl Axel Mikael Mårtensson, who wield a multitude of instruments – including harpsichord, accordion, bells, boneflute, cellos and cithers (as well as all the usual suspects) – to conjure some of the eeriest, most ethereal Black Metal you’ll ever encounter.

A sprawling work of incredible depth, vision and discipline, the album has been unleashed in glorious double vinyl format boasting all the original artwork, a cool DIY booklet (black and white, stapled together) and a CD copy of the music, all done with the assistance of The Ajna Offensive but retaining the feel of an independent release. It’s a beautiful product to have and to hold; and also to listen to.

Truthfully, though, the listening experience can be demanding at times as the production is murky and lo-fi, with about as much polish as you’d find on a tramp’s vomit-encrusted slipper. It can be difficult to get your ears beyond the dull sound but, if you persevere, you will discover a band that has all the charm and originality of Urfaust, approaching Black Metal from some leftfield terrain and producing something both interesting and challenging.

I’ve had this album for two months now and still haven’t managed to get my head around it. Did I mention that it lasts for almost 80 minutes? Reverorum Ib Malacht seem to be obsessed by Latin scripts, religious content and such like (mostly delivering their sermons by means of Gregorian chant). But I certainly wouldn’t compare this in any way to Deathspell Omega or any other orthodox BM band I’m familiar with.

Even if it isn’t always brilliant, ‘Urkaos’ is just different on so many levels that it stands out from the pack. Approaching dark ambient at times, the darkness prevails throughout and the Swedes never come close to exiting the nether realms of the deepest, deepest underground. Thus, I’d categorise this as one of the least-commercial records you are ever likely to hear, rendering it a compulsive – if pricey – acquisition.