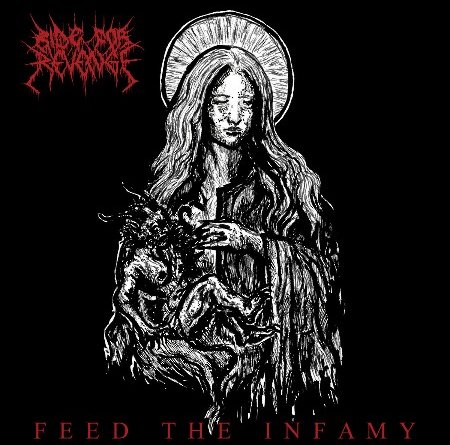 Ride For Revenge is one of a very select number of Black Metal bands to have successfully forged a sound all of their own. While obviously this isn’t necessarily something that artists aspire towards – especially within Black Metal, where capturing a particular mood and channelling the desired spirit is more important – it is nevertheless a trait that sets RFR apart.

With this putrid project, which marked its 20th anniversary in 2021 with the release of eighth full-length, ‘Feed Thee Infamy’, Harald Mentor has created a monster that offers us the best of both worlds. Ride For Revenge effortlessly conjures that true spirit of Black Metal through music that is so depraved and unhinged that it almost defies description but, at the same time, amid a nauseating sea of mediocrity and often-tedious monotony, here is an inimitable sound, a unique identity, something genuinely different.

If the needle were to be dropped at a random point on any Ride For Revenge record, even the most casual Black Metal listener should be able to quickly discern the artist. The niche Harald has tapped into makes reviewing his releases under this banner at once extremely easy and also quite difficult. We know what we are getting, but what more is there remaining to be said about the mandatory nature of the music contained on each successive release? In short, every Ride For Revenge record is worth tracking down and it’s unlikely this is going to change.

Everything about ‘Feed The Infamy’ reeks of quality and corruption, from the familiar embrace of opener ‘Forever United’ through to the death growl and experimental leanings of the short title track, which closes out the album on a suitably unpredictable note. The music generally operates at slow-mid-pace and this is undoubtedly where Ride For Revenge is at its most uncannily effective. ‘I Reek of Old Alcohol’ is more direct – prime RFR filth, and thus perfectly-placed as the second offering on the album. But the real strength of ‘Feed The Infamy’ lies in the middle section – namely ‘Ride For Revenge’, ‘The Altar of Eternal Power Fire’ and ‘Energy Angel’ – three infectious, twisted and immediately memorable executions which capture this frighteningly distinctive and enduring force still at the peak of its power.

As we have become accustomed to, the macabre rhythm section is always prominent, with clanging bass and ritualistic drumming to the fore, resulting in a haunting, hypnotic and intoxicating experience. The demonic vocals are as sick and degenerate as ever. There’s an almost psychedelic, carnivalesque feel lurking beneath the surface, taunting and tantalising, befitting another nightmarish descent to the pits of incurable insanity. While, at this stage, we can all too easily take Ride For Revenge for granted, could any other current Black Metal band deliver a song as totally fucked-up and bizarre as ‘Whatever in Hell It Is’? Probably not.