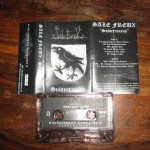 ‘Subterraneus’ is one of the most impressive underground Black Metal albums I’ve heard in years. I’ve been hard-pressed for cash recently – you may have read how Ireland has been society-raped by errant bankers, greedy property developers and corrupt politicians? – so I decided to start buying some cassettes. As you do. The benefits of purchasing albums on tape are twofold: they are cheaper; and it opens up more windows of opportunity in terms of discovering what lies in the true depth of the underground. That’s where I found Sale Freux and ‘Subterraneus’ – an album so genuinely steeped in underground magnificence that it makes me almost glad to be broke. Everything about this cassette is fantastic.

Sale Freux is a one-man entity, from France, the lone creator being Dunkel, who eschews all things modern in favour of a lo-fi, fuzzy sound that seems to have been recorded in some dark nocturnal woodlands with ravens flying overhead (and joining in every now and again). The songs vary in length from two-minute opener ‘Rampant Dans Les Marais Amers…’ to the epic twelve-minute final track ‘Rats Des Champs (Rural Black Metal)’, with a noticeable predilection for longer tunes as the album progresses. (There are only three songs on Side B and they clock in at over 30 minutes between them.)

However, regardless of whether he’s spewing out a standard-length track or weaving a more-epic one, Dunkel is a master of pace and atmosphere, composing and executing all his work magnificently. We are served an abundance of acoustic and ambient interludes, which bolster the overall package, complementing the fiercer passages perfectly. The production is no more than adequate, which adds greatly to the appeal; this most certainly is not Dimmu Borgir or Satyricon! I could easily imagine ‘Subterraneus’ being recorded in Norway in 1992 and, to be honest, it’s probably as good as anything that was. I’m not sure if there’s a CD version of this in the pipeline, but it’s so good it seems unlikely to disappear into obscurity. Then again, stranger things have happened in this upside-down world.

In short, this is one of the best ‘new’ Black Metal albums you’re likely to clap your ears upon these days. It’s not easy to put my finger on exactly why it’s so great … I think it’s largely due to the authentic manner in which the album as a whole personifies the true essence of UGBM. From start to finish, it’s an exhilarating, breath-taking ride. It’s got that same raw and endearing vibe as early Leviathan, Striborg, Ildjarn, Burzum or Sacrificia Mortuorum but doesn’t sound quite like any of these. In most regards, ‘Subterraneus’ exists in a league of its own.

There are only 100 copies of this. I strongly recommend you to hunt it down.