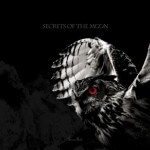 Sadly, Secrets of the Moon’s best days appear to be behind them. ‘Seven Bells’ kicks off encouragingly enough with the rather impressive title track but has bottomed out pitifully and harmlessly by the time the really embarrassing seventh and final song ‘The Three Beggars’ seeps through the speakers. The musicianship is flawless, of course, but SOTM have just become so safe, so inoffensive, so flaccid and tame that it’s nigh on impossible to enjoy them or take them seriously.

Whereas ‘Stronghold Of The Inviolables’ and ‘Carved In Stigmata Wounds’ represented ground-breaking offerings from the Germans, they seem to have settled into a creative rut, now happy to recreate a polished, clean, crisp sound that is in many ways the antithesis of what Black Metal should be. Whereas those two albums demonstrated some nice ambient touches, a vital component of SOTM’s sound, this latest is merely graced with random bell chimes scattered here and there, leaving me feeling short-changed. Those who enjoy extremely well-produced metal that is in no way raw, ugly, esoteric or corrupt should find something worthy here. I’m going to pass and say no more.