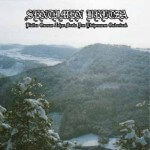 If a better album has been released this year, then I’ve yet to hear it. As well as being quite a mouthful, ‘Bizitza Osoan Zehar Sortu Den Etsipenaren Ondorioak’ – the third full-length from Basque black metal purveyor Sentimen Beltza – is also an extraordinary workout of utterly supreme underground magnificence, further marking Oindurth SaVinitta out as a special talent that should be nurtured and cherished.

I find it astonishing (but typical) that a ‘band’ like Burzum can sell albums by the bucketload, while Sentimen Beltza remains in obscurity, hardly known or heard of. Take if from me, there is no comparison between this exceptional BM release and a lacklustre piece of shit like ‘Fallen’.

As mentioned in a previous review of SB, the Basque entity specialises in hugely emotional, plaintiff, spiritual, epic Black Metal that remains raw and forlorn throughout despite containing an addictive melodic undercurrent. For me, ‘BOZSDEO’ is a work of absolute genius that could be used as a blueprint on how to make the perfect album. It hits the nail on the head in every respect, with just the precise amount of melody, aggression, repetitiveness and melancholy to appeal to the fallen warrior in all of us.

Appreciators of bands like Drowning The Light should gobble this up but, let’s be realistic here: nobody gives a shit about great music. Quality doesn’t matter to the masses, so Sentimen Beltza will remain on the very fringes of the Black Metal underground forever. But if you want to go against the grain and hear some unbelievably good grim and atmospheric blackness, you should investigate SB further before he slips off the radar into some black hole or something.