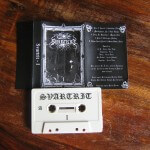 Swedish entity Svartrit is something of an anomaly, even by Black Metal standards, having released their first three full-lengths of anti-cosmic fare pretty much at the same time, in 2010. Bubonic has just issued the cassette version of the debut – “I” – and, being the curious so-and-so that I am, I just had to get my hands on it. It’s a pro MC with nice presentation and it set me back just €4, which is a good start by any standards.

The album is a haunting, at-times-chilling affair but falls somewhat short of delivering everything it promises. It’s good without being great; enjoyable and intriguing but neither mesmerising nor addictive. Mind you, not too many releases are, so perhaps I’m being a little harsh… This is one of those inoffensive, pleasant BM albums you could listen to all day long without becoming bored. It’s reasonably raw and ragged but also melodic in parts, similar perhaps in spirit and tone to Arckanum or Nastrond – without ever sounding exactly like either.

The guitars are shrill and thin, the drums sound like a chicken’s head being banged against the lid of a coffin, the vocals well-executed if understated standard rasps, with a little variation (most notably on “Jätten”, the brief eighth track). All in all, this is reasonably infectious stuff that’s more than worthy of investigation. It’s certainly one that keeps the underground flames burning brightly, even if it falls slightly short of being a classic.