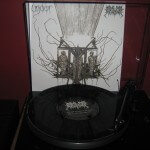 Bearing in mind the almost prohibitive limitation of this vinyl-only release, I think it’s safe to assume that the bands and label don’t really care whether you purchase it or not. Nor do I. But I’d recommend it strongly, all the same. This is great underground Back Metal. With a twist. The sort of release that a BM fanatic couldn’t possibly regret owning…

I wasn’t familiar with the German / Hungarian act Undor previously but I’ll be keeping an eye out for them in future (though rumour has it that they may have disbanded already). Their contribution is ‘Sanguis Sacer’, a lengthy, sprawling slab of mid-tempo blackness that crawls along and infects your mind like a germ. Dark and sort of depressive and of interminable length (I wasn’t going to clock it), it’s a superb offering that highlights Undor as one to watch. That was a true bonus because it was for the inimitable RFR that I purchased this record:

Ride For Revenge also spews out a big long fucker, their anthem a contorted, uncooperative, non-standard Black Metal tune, an epic distortion that has to be consumed as a whole, Upon first listen, I thought the drone and noise at the start – which goes on for quite some time – was completely unnecessary and nigh-on-ridiculous. However, when consumed as part of the whole, it works wonderfully well. Treated as one complicated piece, ‘Ridiculed by Ladies of the Moon’ is something very special indeed, drenched in reverb and bass-heavy in a way that RFR has mastered.

In terms of vocals, it’s that bizarre existing-on-the-outskirts-of-civilisation snarl, almost animalistic. Subhuman. A feral rasp that’s reminiscent of Blood of the Black Owl, only weirder. This is the kind of Black Metal you’d find in the gutter along with the corpses of whores and politicians; absolutely superb.