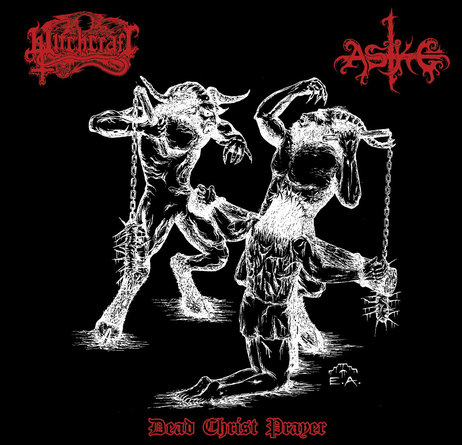 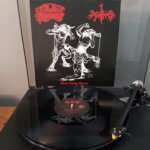 Reeking of fevered underground authenticity and burning black filth, ‘Dead Christ Prayer’ is an indispensable collaboration of raw, lo-fi Finnish Black Metal sacrilege, old and new demonic forces – the master and the disciples, so to speak – coming together to mock the lifeless shell that once hosted the king of the liars. The recordings on this split LP are distant, ancient, irreverent and timeless, bringing the listener right back to those glorious days of bygone times when Black Metal was dirty and dark and dangerous (when the aroma of engulfed pews filled the northern air), uncontaminated by those who strive to reshape the subgenre to fit their dubious, ill-informed and frankly laughable ideals.

The heirs to a throne of flies and decadence are first up, comparative newcomers Witchcraft contemptuously vomiting forth five unhallowed curses in less than 14 minutes. While many newer Black Metal hordes seem hellbent on singing the praises of fuck-knows-what through polished, clean productions with zero integrity (and still manage to sell records, somehow), it’s refreshing to see that Witchcraft are sticking to the unblessed basics, delivering unbending, unyielding Satanic Black Metal that comes from the darkest of hearts – sordid, degenerate and diseased, the way it was always meant to be, song titles like ‘Funeral Throne Of The Sadogoats’ and ‘Raid From Hell’ perfectly epitomising the ominous, evil nature of proceedings.

The ante is upped on Side B, Aske representing the very essence of uncompromising underground Black Metal. Grim, raw, ugly and twisted, here is an entity that has not once deviated from its malevolent course along the left hand path. Fronted by unflinching dark arts devotee Behemoth, Aske is one of the seminal founding forces of Finland’s raw Black Metal ‘scene’, with a history of debauchery and depravity that goes back as far as the early ‘90s, when Beherit and Archgoat were a couple of other brigades also setting off on their respective journeys.

Devoted, possessed and patient, Aske has remained deeply embedded in the underground for all these decades, flourishing rather than stagnating, the three offerings on here making it clear that this is indeed a unique and special entity. Grizzly, freezing, shrill and oh-so-raw Black Metal majesty flows like blood of the baptised through the speakers, a skillfully-crafted intro setting the tone before the hypnotic reverberations of ‘Kurnigia’ herald the ancient call of ‘Nuntius (Acip)’ – a conjuration that could seamlessly slot into any of Black Metal’s rightly-lauded masterworks of yore.