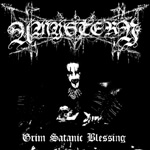 Less than a year after their outstanding debut, ‘Extermination, Followed by Cryptic Silence‘, Amystery returned with their sophomore full-length, again via Pestilence Records. ‘Grim Satanic Blessing‘ is a brilliant example of underground blackness, pure and simple. We get seven tracks of grim and raw black metal (plus a spooky intro), washed in a buzzing melody that reeks of raven wings and dank caves.

It’s coated in cobwebs and decay and disease and you need to keep the volume up because the production seems so wobbly and precarious that at times one fears the music might fall off the disc, sliding down the front of the stereo in a pool of plagued plasma. Or something. Exercising admirable restraint, Amystery keep proceedings at mid-pace for the most part (but also know when to step on the pedal), resulting in a cocktail that relies more on feel than force.

There’s a sense of forlorn majesty at work, most notably on ‘Awake The Dead‘, a schizophrenic offering that calls to mind all the subgenre’s greats. A nostalgic trip in many respects, but overwhelmingly refreshing and thoroughly essential for all fans of good old grim black metal. Croaking and buzzing and pounding in His name, ‘GSB’ stands as proof positive that BM is anything but dead.