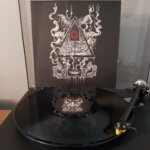 Not for the weak-eared or sensitive or easily-offended or even those possessed with merely a passing / pretentious interest in the darkest depths of the underground is Ancient Burial’s particularly uncompromising, unapologetically crude strain of raw, noisy and unpolished Black Metal as evidenced on debut full-length, ‘Beyond The Watchtowers’. Cut obdurately, contemptuously from the reeking belly of Portugal’s filthy, fertile Black Circle, this is the epitome of harsh dissociative blackness stemming from a sense of isolation and detachment that simply doesn’t a flying fuck give.

There’s no attempt made on ‘Beyond The Watchtowers’ to make things comfortable for the listener, especially those who might be experiencing a moment of weakness in their poor little organised headspaces where things have to be logical and lined up in accordance with perceptions to achieve optimal convenience, unchallenged. Thus, if you are precious and looking for lush or graceful or avant-garde or sophisticated or progressive or experimental or showy-offy Black Metal, then you most definitely need to negotiate a swift U-turn and look elsewhere. Because this record might upset you. Could scar you for life.

Blessed with a production that’s thinner than a butterfly’s foreskin, the seven shrill, shrieking, severing tracks presented hereon are frenzied and frenetic and barbaric. Sounds like demonic entities banging out unrehearsed, improvised chaos in some blood-soaked murderhouse in the middle of the woods, where the anonymous trio have just committed all manner of atrocities and decided to put on a devilish concert to mark the ghoulish occasion.

Subtle as an axe to the back of the skull, Ancient Burial’s dark spells are disjointed and dissonant, unreservedly chaotic and out of control, a veritable maelstrom of malevolence and mayhem, touching the ugly heart of what Black Metal (for me) was always meant to be. This music was never supposed to appeal to the masses. It’s not for nerds to discuss on panic-stricken notice boards, wailing like girls on the blob because they missed out on the colour variant they had their hearts set on, now resigned to the unbearable truth: that they might not after all be able to impress their followers on Instawank.

Devotees only need apply. Everybody else, do us all a favour and fuck off.