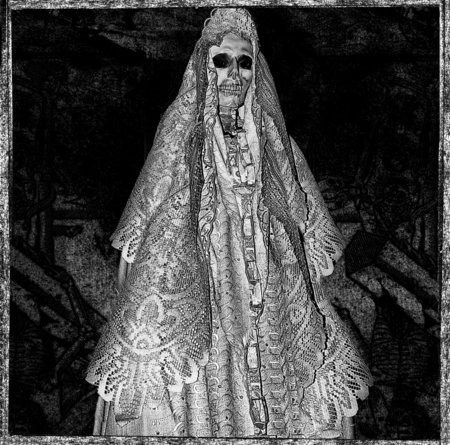 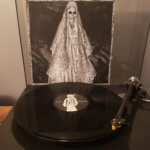 Dodenbezweerder’s debut LP, ‘Vrees De Toorn Van De Wezens Verscholen Achter Majestueuze Vleugels’, is a shimmering, spectral nightmare of ancient, lo-fi, raw, ambient black doomnoise. If you can’t work out exactly what that means, then don’t worry too much … neither can I. It’s not the easiest record to grasp or explain; with the music being so unique, unusual, interesting and full of intrigue, this haunting underground offering really is the epitome of occult unorthodoxy.

Running for cover, the guitars tend to fizz sometimes like the sound of a thousand bees trapped in an old kettle, the drums fizz too, then morph into crashing waves, then bones thudding off coffin lids, always trance-inducing and ritualistic, the music as a whole elusive, enigmatic and oftentimes intangible, due largely to the whole album being cloaked tantalisingly within a clandestine production, the noise and fizz thus tending to dominate, ‘Vrees De Toorn Van De Wezens Verscholen Achter Majestueuze Vleugels’ – a copy ‘n’ paste title if ever there was one – sounding like it was recorded by dead people in an ancient castle or dank dungeon beneath an ancient castle.

While, despite its undeniably eerie and unsettling nature, the music itself is relatively straightforward and inoffensive, invariably slow-to-mid-paced but always terrifying, it’s the ghastly shrieks and hellish hollers that contribute most to rendering this album such a distressing, desperately uncomfortable experience, conjured by an unhinged Dutch duo (comprising Mories from Gnaw Their Tongues, De Magia Veterum and a host of other projects as well as S. van der AA, now the drummer from Hypothermia), both of whom demonstrate tremendous restraint and understanding of atmosphere to create noisy raw ambient soundscapes that could be lifted directly from an old black and white horror movie or perhaps even the embodiment of a childhood trauma that will never go away.

It’s impossible not to get sucked in by the foreboding, ominous mood of this hideous and harrowing slab of black, gloomy noise. If ghosts recorded a Black Metal album, it might sound something like ‘Vrees De Toorn Van De Wezens Verscholen Achter Majestueuze Vleugels’.