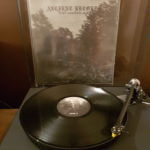 It’s almost five years since I reviewed the lucky dip that was ‘Demo Compilation Part 1’ and a lot of piss has steamed beneath the Ancient Records bridge since then, most notably the public spat between Sir N., who is credited with all the material on that particular release, and Swartadauþuz, who wrote and performed the music – in conjunction with lyricist / vocalist Likpredikaren (Demonomantic / Summum) – on the substantially-better follow-up being contemplated right now.

This massive double-LP – housed in a classy gatefold jacket, with all the lyrics included – is essentially a collection of unused and “mostly unreleased” material written and recorded between 2007 and 2016; subsequently remixed and remastered at Afgrundsmysticism Studios in 2017.

Swartadauþuz could certainly never be accused of over-selling himself. Considering that he regards many of his best albums as mere demos and that the tracks on this release are off-cuts that just about saw the dark of night, it’s hard not to admire his dedication to the black arts.

There’s a real mixed bag of material on ‘Demo Compilation Part II’ that hints at most of the best bands associated with this inimitable Swedish madman. Nineteen songs in total and, surprisingly in this age of cunts, still widely available at the original asking price.