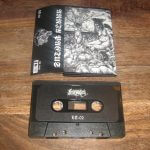 Emerging from the darkness, despair and desolation of Alaska, Arria Paetus spew forth their self-titled debut full-length and it’s immediately apparent that the flames of rage burn wildly in their blackened hearts. This album is imbued with venom, contempt and revulsion for all things human, blazing through the speakers like hot spears through the livers of mankind.

I have a real soft spot for any band that makes no effort to conceal their disdain for all life because, let’s face it, this planet is ruled by a race of fucking germs. Copious insidious melodies and the widespread use of dual vocals – black shrieks and death growls – complement the pummeling hostility and offer the listener’s ears some respite but, by and large, this is a caustic, angry and nihilistic affair. A labour of loathing directed at you and me, and rightly so.

Due to its ambitious nature, ‘Arria Paetus’ might appear rough around the edges, and slightly disjointed at times, but that only adds to the appeal when we’re talking about raw, underground Black Metal. All things considered, this is an excellent release. Give it a listen on Bandcamp and then order a tape before they’re all gone.