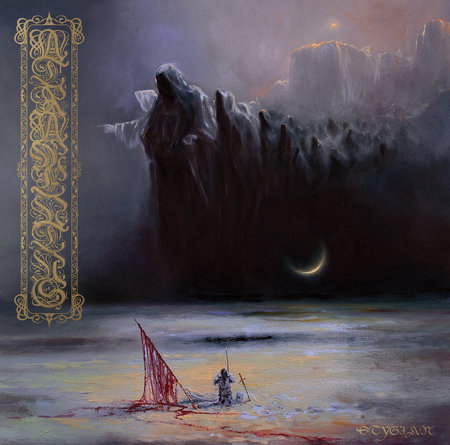 ‘Stygian’, the debut full-length from Atramentus, presents three-quarters-of-an-hour of harrowing, soul-crushing Funeral Doom that will quite literally give you the chills. This bleak and agonising three-track album constitutes a remarkable accomplishment by any standards, as one of the most ambitious undertakings in extreme music history comes to glorious fruition, heralding the darkest of emotions through haunting, passionate and excruciating entreaties.

As concepts go, the story behind ‘Stygian’ is vast and captivating. The narrative is set within a fictional, almost Tolkien-like world that has been created by the twisted, visionary mind of Philippe Tougas, where the lyrical and music content of Atramentus’ conjoined twin Chthe’ilist is also hosted. Driven by greed or hubris or both, the protagonist in the story – The Guardian of Atros Kairn – is granted eternal life after seizing the mythical sword of Atra Eas from the sun-goddess, Heeos. The results are not as empowering as he had hoped…

He watches everybody he knows and loves inevitably die and disappear. Then, the last living thing, he drifts across frozen, desolate plains, debilitated by both emotional and physical torment, bellowing and protesting in agony, racked by guilt, regret, loss, pain, isolation and utter loneliness, life proving to be a fate worse than death. The deft manner in which Atramentus successfully conveys the character’s unbearable suffering through rich, slow, tortured, cold Funeral Doom is nothing short of staggering; breath-taking.

Funeral Doom is a subgenre renowned for its depressing, crushing nature and ‘Stygian’ is worthy of its place in the pantheon of greats alongside Thergothon, Skepticism, and Evoken, with hints of My Dying Bride’s most miserable moments also detectable. This is a descent that has to be experienced to be appreciated, so immersive and involving it is that words will not do it justice.

The album is divided into three movements, all heading in the same ominous downward direction, ‘Stygian I: From Tumultuous Heavens… (Descended Forth the Ceaseless Darkness)’ and ‘Stygian III: Perennial Voyage (Across the Perpetual Planes of Crying Frost & Steel-Eroding Blizzards)’ epic outpourings, totalling almost 40 minutes between them, with the five-minute ‘Stygian II: In Ageless Slumber (As I Dream in the Doleful Embrace of the Howling Black Winds)’ serving as a point of transition between pain and absolute agony.

Providing a novel, introspective reflection on the curse of existence, ‘Stygian’ is a moving, touching, devastating work of merciless dark art with no salvation in sight.