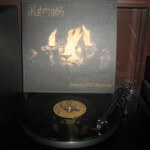 On their stellar debut full-length, ‘Testimony Of The Abominable’, which first saw the light of day on CD two summers ago, Balmog churns out an exhibition of Norwegian, occult Black Metal. Death, darkness and tombstones abound on this little-known masterpiece of Norwegian BM brilliance, the curveball being that Balmog are in fact Galician, hailing from the north west of Spain (above Portugal).

Of course, the geographical origins of this album should be of little consequence but it is interesting the different perspectives people tend to foster of various Black Metal acts depending on the creators’ homeland. I’m convinced that – though inevitably remaining firmly ensconced in the underground – Balmog would be somewhat more heralded if they hailed from Trondheim.

As it is, fuck-all know about them but this is a stunning record and it comes complete with a tasty black-and-white A5 booklet containing lyrics and some artwork. A hidden gem.

One thought on “BALMOG – TESTIMONY OF THE ABOMINABLE LP (Bloody Productions)”