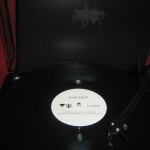 One of the first things I always wonder when I discover a new Black Metal band is where they come from. So, let’s get that one out of the way first: Barghest crawls out of Baton Rouge in the southern US state of Louisiana. A region I’d normally associate with sludge but there’s nothing remotely sludge-y about this self-titled debut album; to the contrary, it’s corrosive and grating and downright ugly. This is fantastic.

Listening along, bobbing my head and flexing my brain, I come to realise that this defies categorisation or pigeon-holing. It doesn’t sound particularly like USBM; it could just as easily be Swedish or German. But it sounds not European either. A very unique sound, then, and a very enjoyable one, too. The music is extremely violent and the vocals are as harsh as you will hear this side of Hell; yet it’s soothing to the soul. This is the sort of release that should restore your faith in Black Metal. The fact that it’s unleashed in glorious 12” format as opposed to a gaudy, cheap CD adds massively to the overall appeal.

We get six songs in total, broken up by a short instrumental at the end of Side A. There’s a lovely carefree vibe to the guitars, but every note is deliberate and concise. There’s a fair bit of speed and bedlam at play but it all holds together perfectly, like a monolith, untouchable and defiant. I wouldn’t say this is quite in the same league as Ash Borer or Fell Voices, but ‘Barghest’ is an exceptional slab of work nonetheless.