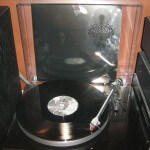 Bestia Arcana features current and ex members of Nightbringer and it is by no means a sweeping generalisation to suggest that if you enjoy one band then you will more than likely also appreciate the other. It’s hard to know where exactly one project ends and the other begins and I have to confess that if ‘To Anabainon Ek Tes Abyssu’ was presented to me as a Nightbringer album it wouldn’t have raised my eyebrows. Not that much does, these days.

Bestia Arcana’s only full-length to date, ‘To Anabainon…’ was originally released on CD by the dependable Daemon Worship Productions in 2011 and has now been given the loving 180g double-vinyl treatment by Osmose. I have a minor objection concerning the practicality of releasing a 39-minute album in 2LP format when the five songs would easily have fitted onto one record.

As I’ve asked countless times before, who needs a redundant Side D with a dumb etching on it or a second record with just one song? Having said that (again, I know…), there is undoubtedly something more fulfilling about owning a double LP than a single one and, if it works for Antediluvian with ‘Through The Cervix Of Hawaah’ (36 minutes), then why not here?

Musically, Bestia Arcana offers forth a hypnotic but harsh helping of amazing dissonant, corrosive Black Metal which at times resembles nothing short of a fucking aural maelstrom. The lyrics have been printed on the inside of the sumptuous (smudgy fingerprint-enticing) gatefold jacket but it is nigh on impossible to follow them…  ‘The Pit Of Sheh-ohl’ provides a little respite from the ferocity but, for the most part, this is an unforgiving and exceptionally difficult listen.

Which is most welcome.