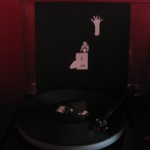 Previous exposure to Black Cilice was zero so this represented a journey into the (relatively) unknown. Hardly a leap of faith, though, as I know Discipline / Bubonic invariably release superb stuff. True to form, ‘A Corpse, A Temple’ is another sure-fire winner from the Iberian Peninsula. We get six tracks of Portuguese Black Magic forged in chaos and fire, steeped in damnation, a conjuration that could almost tempt the dead back from beyond their final resting places.

If you like melody and some degree of accessibility in your Black Metal, then look elsewhere. From the moment ‘The Gate Of Sulphur’ rips into my living room, it is obvious that Black Cilice has no place for such sentiment or needless embellishment. I’m sure there is some semblance of order amongst the swirling, suffocating, all-pervading maelstrom of gruelling disharmony but for the most part this record is all about noise, pace, aggression and intensity. With no let-up.

Harsh and sheer, unearthly, otherworldly, ‘A Corpse, A Temple’ is grim in a manner that 99% of Black Metal bands couldn’t begin to comprehend. ‘Night’s Veil’ charges forth like a herd of lost souls, a murder of vultures seeking freshly-spilled life and ‘Blood To Murder’ is relentless, unremitting, a barrage of black noise that pounds, pummels, disorientates and – well – satisfies in abundance.  On Side B, ‘The Key’, the delightfully-addictive ‘Resurrection Of Dead Curses’ (with its almost tribal mantra) and ‘Among Dead Rats’ hammer home the painful point, invoking the dead, imploring them to return.

Instead of vocals, we are presented with harrowing howls, shattered shrieks and all manner of wails, moans and bellows. Drums crash and pound like jesters dancing on coffin lids, the guitars hum and fizz – a tortuous cacophony of flayed, discordant chords summoned by the truly demented. While ‘A Corpse, A Temple’ is undoubtedly a difficult, energy-sapping and demanding listen, it is also pure and true and ultimately exceptionally rewarding. The essence of underground Black Metal.