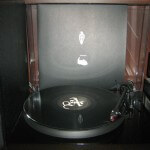 Black Cilice’s debut full-length ‘A Corpse, A Temple’ was really fantastic, so I bought the follow-up with total confidence. An almost-identical front cover re-assured me that I was in for more of the same – which is precisely what I was looking for! (This clearly isn’t a band that’s suddenly going to change its approach and go all mature / mainstream…)

Once more, we have six songs – comprising a running time of 35 minutes. From start to finish, it’s fuzzing, violent, distorted underground Black Metal … with melody essentially conspicuous by its absence. The inclusion of a lyric sheet serves to highlight just how unorthodox and out there the howls and bellows are. Impossible to follow, but it’s interesting to have a read through the lyrics in any case as they provide an insight into the mindset and conceptual content involved.

Everything I wrote in my review of ‘A Corpse, A Temple’ applies again here (how’s that for a short cut?). Released on a sister label of the ever-dependable Discipline / Bubonic, ‘Summoning The Night’ is a worthy follow-up to Black Cilice’s magnificent debut and yet another example of supreme Portuguese decadence.