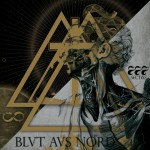 When one of your favourite bands of all time hooks up with your favourite label, it’s time to start pinching yourself. Yet this is exactly what transpired last year when DMP and BAN joined forces, culminating provisionally in the intriguing vinyl-only ‘What Once Was … Liber I’ EP and followed now with the monstrous eighth full-length album, ‘777 – Sect(s)’.

Apparently, this is the opening shot in a trilogy of new Blut Aus Nord offerings. I must concede I’m not too bothered by such notions – concept, trilogy, sidestep, blah blah blah, who cares? All that matters is the music and it must be said that this one compares more than favourably with anything else from Vindsval’s impressive canon of work.

First off, the presentation is excellent – nothing less than we’ve come to expect from this French label. Secondly, the production on this release is spot-on, allowing every discordant note and chord to glide effortlessly through the speakers, resulting in an organic, live feel that so much of today’s Black Metal lacks. Not normally the kind of thing I comment on but, hell, kudos to the producer because ‘777 – Sect(s)’ sounds sublime.

The music itself is prime, unmistakable Blut Aus Nord. As soon as you hear it, you know straight away who it is. Nobody else sounds anything like this – how many BM acts can we genuinely say that about? As corrosive and chaotic as we’ve come to expect from these masters of urban malediction, ‘777 – Sect(s)’ is replete with the familiar sounds of alienation associated with BM’s most trailblazing entity.

But there’s a perfect balance at play. The non-aggressive parts are more pronounced than hitherto, resulting in a magical listen that offers harshness and disturbing, haunting eeriness in equal measure. All the songs are superb but a special mention for the ultra-majestic ‘Epitome 04’ – possibly the greatest Blut Aus Nord song yet. I’m almost ashamed to admit it but I had forgotten just how fantastic this band was. ‘777 – Sect(s)’ showcases an astonishing Black Metal act at the absolute zenith of its powers, churning out the type of unique, inimitable and downright incredible music that makes life worth living. Essential in every respect.