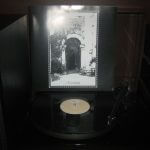 ‘Necrotelepathy’ is the debut full-length from shadowy Portuguese shaman Candelabrum and it contains two epic rites of raw, occult, otherworldly, cavernous, recorded-in-a-pit-or-cave-or-maybe-in-hell-itself-except-there-is-no-hell Black Metal – ‘Distant Voices In The Darkest Night’ and ‘Prayers For The Damnation Of Man’ placed back to back, two devilish offerings at the altar of decay.

I wish Altare would get the guy who punches the holes in the middle of their records to make them a teeny bit bigger as they keep getting stuck on my platter. Literally. Not that it would necessarily be a bad thing to have to play this record over and over again until the end of time but I do like to have a choice and it’s only a matter of time before I either lose my deck or a precious record or perhaps my mind.

This strictly-limited LP is a real underground effort, pregnant with homemade spirit and aesthetic; adorned with staggering, evil Black Metal that truly cannot be topped because it’s nigh on perfect. Totally essential, even if you do end up having to fork out on a new record player.