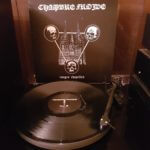 Amid the clamour for the latest and rarest releases from Skjold and Final Agony and GoatowaRex and Ancient Records and New Era and Kuunpalvelus allied to a trickle of new underground boutique labels who seem hellbent on making it as damn difficult as possible for people to actually buy their records – Temple Of Wounds, take a fucking bow, with the Willie-Wonka-golden-ticket Lampir record! – it’s refreshing to see that Fallen Empire has continued to not alone release Black Metal of the highest calibre but also to keep the records readily available, within reason. Rage manifests itself in longer sentences.

There was no brouhaha around Chambre Froide’s ‘Rouges Chapelles’ when it appeared humbly and unhyped on vinyl last year. But there should have been. You can still snag this amazing release, too, surprisingly, rather than annoying the fuck out of yourself chasing something of higher limitation and – in all likelihood – lower quality.