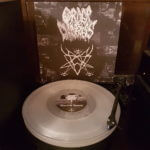 This first surfaced in 2016 on a cassette limited to just 50 units and was disinterred in December by IBP and given the vinyl treatment. Instead of acting the cunt, the label opted to make the record widely available – with a generous limitation of 300, crystal clear vinyl – and, for good measure, a self-titled demo LP (including the tracks from the sold-out ‘Cosmic Tyranny’ tape on Side B), was released at the same time, in conjunction with Amor Fati.

Thus, two utterly fantastic Order Of Darkness LPs emerged at the same time and both are still available to buy for just €15 each. Grabbing one or both of these records makes sense for anybody who wants to own some exceptional raw BM on vinyl without having to chase their tail, jump through hoops, blow their father, engage a page monitor, blow themselves or whatever it is the kids of today are doing to get their hands on the blink-and-you’ll-miss-’em treasures being half-bestowed upon us.

Yes, I’ve got a bee in my hoodie. I’m fucking sick of it. You have to commend a label like Iron Bonehead, which releases records and keeps them released. Look what he did with the fourth Black Cilice album, for example, to satisfy demand … I lost count of the represses, three or four anyway, delivered with a minimum of fuss, catering to consumers. Other labels should take note. Release the fucking thing properly or fuck off.