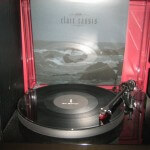 Clair Cassis is Velvet Cacoon in all but name. For some reason, the oft-maligned VC opted to change their name; I can’t imagine why. Anyway, the debut album under the more-recent moniker was committed to vinyl in 2010 but I’ve only acquired it within the past month or so … thus the late, late review. Matters not when reviews surface, though, as good music is timeless – or should be.

I was a big admirer of the original incarnation of the band – ‘Genevieve’ and ‘Northsuite’ are pretty cool albums and their more spacey later work was also intriguing – but I sort of half-expected Clair Cassis to be a pale imitation of the original for some reason. A watered-down version or a cop-out… Not the case, thankfully. The self-titled debut delivers some lush, lo-fi, atmospheric Black Metal that is both unnerving and soothing, raw yet melodic and ambient.

While the music fluctuates between harsh(ish (but hardly)) and sweet, the vocals are always caustic and agonised. Very good vocals, I would venture. This is a relatively short full-length at just 33 minutes but – although limited to 500 copies – it can still be acquired reasonably cheaply (new; not from speculators) and represents a very solid purchase. You don’t have to buy new albums all the time; sometimes the older ones are better.

I would be amazed if anybody bought this and wasn’t impressed.