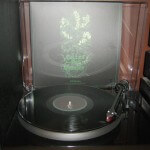 It is creating quite a stir and my first impressions of this album were that it was quite amazing. Had I written this observation after one or two listens, then I would no doubt have been raving about ‘Henbane’ and it would have received full marks. However, upon repeated listens (and there have been many), much of its magic fades away. It’s still a good full-length but certainly not an exceptional one.

The double vinyl edition is splendid, enclosed in a gatefold jacket with the lyrics included on the inside fold. Speaking of the lyrics – and maybe this is because I’m getting older – they are unbelievably childish. The kind of infantile, puerile Satanism that prompts me to believe that perhaps God is the cooler of the two dumb inventions… (but not quite).

Anyway, Cultes Des Ghoules is an acquired taste; their sound is unique and pretty dramatic. Bordering on cinematic. They perform lengthy offerings of nasty, sinister, evil-as-all-fuck Black Metal that sounds sublime when you are in the mood and corny when you are not.

‘Henbane’ is almost an hour long and it is certainly worth checking out. But you’ll have forgotten all about it in six months’ time.

Postscript: upon calm reflection, this is probably one of the most harsh reviews I’ve written. I should stay away from the laptop when I’m in a bad mood!