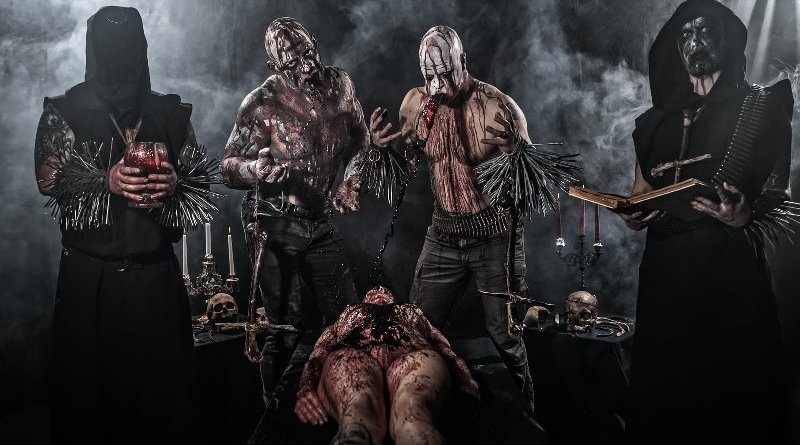 The barbaric battery of death-infused brutality blasting forth from Blood Chalice’s sophomore full-length, ‘The Blasphemous Psalms of Cannibalism’, singles the blood-thirsty, Christ-crushing Finns out as one of Black Metal’s most uncompromising and unholy forces. Guitarist H.V lends some insight into the crooked mindset behind the creation of such a refreshingly-unforgiving onslaught. 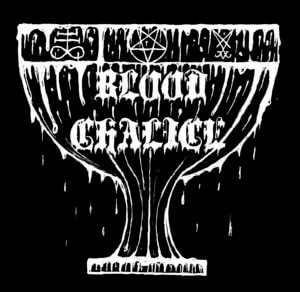 How are things in Finland? It could be a long, cold winter of discontent. Are you stocking up on logs in case gas supplies are rationed or even cut off altogether?
“Things are as good as they can be considering the state of world right now. But sure I’ve horded some logs for the winter. Nothing prepares you for the afterlife as good as the sauna.”

We’re living in strange, unprecedented times. It feels sometimes like we are approaching the end of civilisation as we know it. Which might not be a bad thing in the eyes of those who hold an opposing or destructive worldview…
“No, not at all. It’s thrilling to see how humanity will collapse and what shall rise from the ashes of it. Maybe some kind of Mad Max type of utopia … Who knows?”

In the true – and sometimes forgotten – offensive spirit of adversarial Black / Death Metal, the cover artwork and band imagery accompanying ‘The Blasphemous Psalms of Cannibalism’ is suitably glorious and graphic. Aren’t you concerned that some power-tripping feminists or other virtuous politically-correct crusaders might call to have Blood Chalice cancelled?
“We do not fear anyone. If someone is so disturbed by art they should probably reflect those feelings on themselves. I do not think any kind of art should be censored, no matter how disturbing or insulting it might be.”

Presumably the use of such sexualised and bloody imagery is not designed to shock, but more so because it perfectly complements your music and your message? In reality, anybody who is precious enough to be offended by Blood Chalice is probably unlikely to ever happen upon your art, so it’s aimed at the devoted?
“That’s right. We do not aim to please anyone but ourselves. If some other crooked individual finds and enjoys our work, that’s just a bonus.” 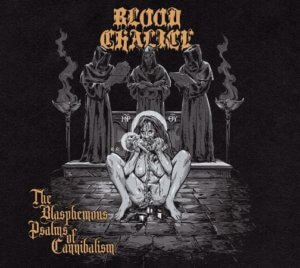 ‘The Blasphemous Psalms of Cannibalism’ is as uncompromising as music can get. Sonically, it’s an orgiastic massacre. What provided the catalyst for such a relentless, sacrilegious onslaught of unhinged barbarity and bloodletting? Who or what are you raging against on this forsaken record?
“The progress of making this album came really naturally. We took the time we needed to make the most out of every song that we composed during these past years. Our work is war against everything that represents humanity.”

Christianity – the anti-human plague from the Middle East – is in the firing line on ‘The Blasphemous Psalms of Cannibalism’. As a belief system it’s laughable, yet millions around the world continue to practice Christianity in 2022. I’m sure you will agree that this is a sad indictment of the human race?
“Indeed. Human nature is weak and only the most pathetic individuals decide to spend their life following some made-up guidelines from these Abrahamic religions. True spiritual and physical strength does not come from god, but from oneself.”

What is the ultimate purpose or mission of Blood Chalice? Is it a fist in the face of convention and norms? An outlet for your disgust at the state of the world? A consummation of Satanic might? Or are you just making Black Metal the way you want to hear it yourselves?
“Blood Chalice is an outlet for our hatred and a way to express ourselves. At the same time, of course we do what we love – uncompromised war metal filth.” 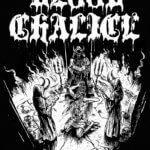 I may stand to be corrected but yours is not what I would term as a typical Finnish sound. Would you agree that you have more in common with bands like Revenge, Black Witchery, Blasphemy and Proclamation than your Finnish brethren? And would you cite any of these as influences on Blood Chalice or are you merely doing your own thing?
“That’s true. We are big fans of those bands. However, one should not forget that bands such as Beherit, Archgoat and early Impaled Nazarene did this kind of music before the outburst of Black Metal in the Nordic countries. We are merely a twisted continuum of this style. Someone’s got to keep the fire burning.”

A ferocious and merciless band like Blood Chalice stands out from the crowd in 2022. Do you ever feel disappointed, frustrated, underwhelmed or indeed infuriated by the mediocrity and safeness of Black Metal in general these days?
“The Black Metal scene is very wide these days. But yeah, you’re right – most of the music is a pointless waste of effort. People who think Black Metal is not about Satan and misanthropy do not really know anything about Black Metal.”

The hysterical reaction to Steelfest’s initial line-up announcement for this year and the manner in which certain bands scurried off the bill for fear of being associated with anything dangerous speaks volumes for the amount of commercially-orientated careerists who have invaded the scene…
“It was really disappointing to see many bands that I respected cancelling their shows for that reason. Some people think everything is only black and white and try to draw politics into everything.”

The festival went ahead anyway and Blood Chalice played their profane part. How exhilarating was it to be back on stage? Are live ceremonies an important part of the overall Blood Chalice experience? Were you happy with your performance? How long had it been since your last gig and are there any more live rituals (or other events of note) in the pipeline?
“Steelfest was great for us. Everything went better than we dared to hope, even though we played on the last day and had our fair share of partying beforehand – hah! We had played only a few private shows during lockdown so it had been a while since our last performance. We have negotiations going on for playing in few different countries, so we shall see. For now, only one Finnish festival slot is confirmed. Playing live has been a big part of Blood Chalice right from the start; it’s something we are really passionate about and I believe that shows.”