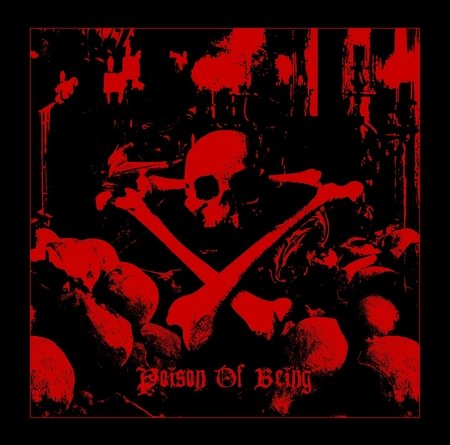 More bleak, nihilistic negation emanates from the underground courtesy of Polish trio Cultum Interitum, whose debut full-length, ‘Poison Of Being’, is a suitably sobering and soul-devouring reflection on the futility, nay curse of existence and innate hopelessness of every individual and each situation that arises along our frustrating journeys to the grave. Listening to these six songs, which invoke darkness and rage over the course of 33 minutes, one gets the impression that perhaps the best-case scenario in Cultum Interitum’s tortured minds would be the swiftest end possible.

Honouring death as the only true god or goddess, ultimately ‘Poison Of Being’ is all about the looming void, inevitable and inescapable. There are elements of both Black Metal and Death Metal in the music, which is executed predominantly at mid-pace as Cultum Interitum are confident enough to rely on their ability to convey a dark and harrowing atmosphere rather than attempting to blindside us with speed and / or aggression.

It works. The songs constitute creepy, eerie, twisted, macabre and disturbing Black / Death, ambient moments such as the climax to ‘Funeral Womb’ and beginning of the title track immediately thereafter adding greatly to the overall mood of despondency deviously delivered. Indeed, ‘Poison Of Being’ is a haunting, chilling offering of profane, occult dark art, ebbing and flowing between defiant rage and surrender, the vocals on this one especially corrupted and diseased.

In summing up, this is not an album that you are going to see much hype around but ‘Poison Of Being’ is yet another boneyard manifesto which highlights the uncanny ability of the Black Metal underground to continuously serve up disturbing, disillusioned delights.