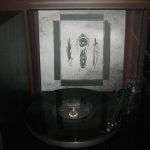 This debut mini-album emerged on vinyl in April of this year and delivers four ghastly, profane rituals over the course of 31 minutes. ‘The Downward Descent’ has been spinning 45 times per minute fairly regularly on my deck of doom this week, as the band is scheduled to appear at Caledonian Darkness II on Saturday evening.

I have no idea why I didn’t review this previously as it’s truly a great record; dark and unhallowed as hell itself but with a lot of variety to be found in its inherent evilness, too.